One feature of info-mode and info consists in the possibility to navigate through the sub-menu of the current page using a text input. This input is capable of word completion that can be completed using the Tab key. When no menu is available in the current page, the text input is replaced with a message warning telling the user that there is "No menu for this node". 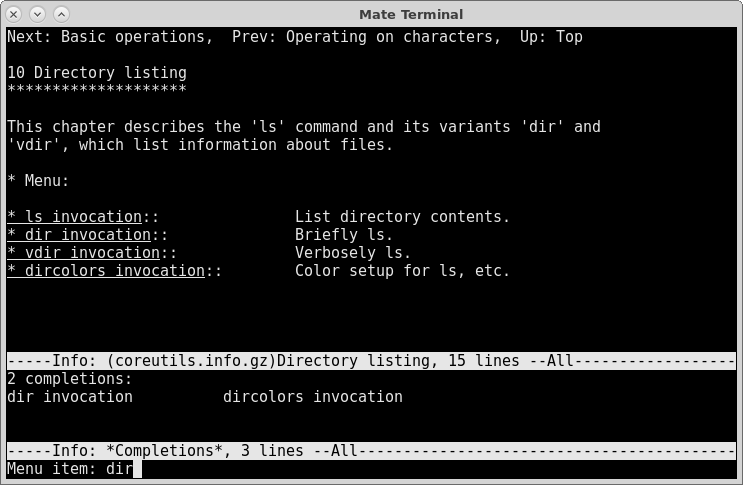 To implement a similar functionnality in a web page, I have used a fixed <div> element containing a <input type="search" list="menu"> element. The list attribute refers to a <datalist id="menu"> element which allows us to define a list of possible completions. To build this list, we have to dynamically scan the current page for links in the footer that we were previously ignoring when scanning for up, next, and prev links. One issue with that approach is that the datalist feature may not be reliable on every browser we want to support. We may want to find an alternative solution in the future. The current display of the text input is less than optimal so it will need some improvements.

Implementing the navigation to top and final nodes

Since the implementation didn't took as much time as expected, I have decided to add the navigation using the < and > keys. The navigation to the top and final nodes can be done using the < and > keys. To implement that feature I have adapted the create_link_dict which was described in last report. Since we are taversing the tree of nodes using a Depth First Search (DFS) algorithm we have to store a link in the returned dictionnary for the first and the final node of the tree walk. To store those links which are not indexed by actual page identifiers but by an arbitary name, we use a pointer property which contains the identifer on the corresponding page.

Handling history of the page navigation

When dealing with classic static pages, the browser offers the possibility to go back and forward in the history of pages previously seen using buttons close to the navigation bar. However when using a non classic navigation such as the one we are using which is based on iframes those button don't work anymore. To make them work we have to use the history API which offers a stack like interface to store data and which is reused by the window.onpopstate handler which is a function receiving a "popstate" event which is sent by the history.back and history.forward methods.

While The initial prototype was already containing some code using this API, I was not familiar with it so it took me some time to get a usable implementation.

The menu navigation was a intermediary step toward having an index and regexp search. The text based input will reused for those features.

The development of this project is done in public. The repository has moved from Notabug to Savannah. You can checkout the "gsoc-2017" branch of the new Git repository to see what is the current state of the project.